Harry Kalas: One of the Very, Very Good Guys

Jim Loomis December 27, 2013 All Posts, Baseball, Hawaii 1 Comment
The latest issue of Sports Illustrated arrived yesterday and a number of pages were devoted to Candlestick Park.  The final sporting event was held there three days ago and they’re going to tear the old place down.
Built in 1960, it was a horrible venue for sports or anything else, notorious for being cold and with swirling, unpredictable blasts of wind. Years ago, Stu Miller, a Giants pitcher of slight stature, was literally blown off the mound in the middle of his delivery. I do believe a balk was called. 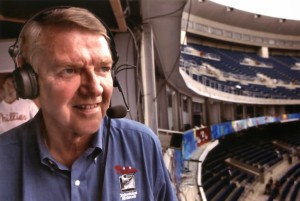 Anyway, I can never think of Candlestick Park without thinking of my old friend, Harry Kalas, the voice of the Phillies on radio and television for almost 40 years.
I was attending a conference in San Francisco probably 20 years ago and discovered that the Giants were playing the Phillies in an afternoon game at “The Stick”. I had never been to that ballpark, which was one reason to go, but it was a chance to see Harry. So I skipped the afternoon sessions and went to the game.
There weren’t a lot of people in the yard that day and I don’t remember who won, but it was a pleasant, sunny afternoon and I thoroughly enjoyed myself … until about the sixth inning when I became aware that it had quite suddenly – literally over the space of 10 to 15 minutes – gotten cold.
The next thing I knew, I could see a mini-tornado – a swirling, twisting column of peanut shells and hotdog wrappers – coming toward me from the general direction of the right field foul pole. I pulled my flimsy jacket up over my head as the whirlwind peppered me with its debris for four or five seconds, then moved on.
By the time the game ended it was damn cold, but I climbed up to the press box and located the Phillies radio both where Harry was recording the final details of the game in his score book. We had a nice reunion.
Everyone who knew Harry Kalas considered him to be one of the nicest human beings ever to walk the earth. Not so many know that in the early 1960s, he was the original radio voice of the Hawaii Islanders, Honolulu’s entry in the AAA Pacific Coast League. And absolutely no one remembers that I was his broadcast partner for several years back then before his obvious talent was recognized and he was hired away by the Houston Astros.
Harry and I didn’t communicate a lot over the years — we exchanged Christmas cards for a while and I called to congratulate him when he was elected to the Baseball Hall of Fame — but I cherished him as a friend. That afternoon in Candlestick Park was the last time I ever saw him.
Harry died five years ago in the broadcast booth preparing for a game between the Phillies and the Washington Nationals. He was 73.

In the next day or so, I’ll relate a very funny story about Harry … a story almost no one knows.