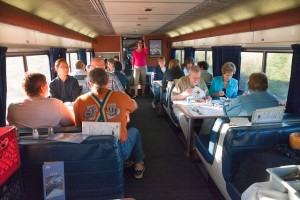 Back in my high school days, I had an English teacher who had a powerful influence on me that continues to this day. I didn’t realize it then, of course.
Norris Orchard occasionally saw merit in some of my literary efforts, but on more than a few occasions, he did not.  In the case of one particular essay — I’ve long since forgotten the topic or the grade he gave me — he circled a couple of paragraphs and scribbled in the margin, “It is to weep!” That really hit me because I knew exactly what he meant: it wasn’t just bad writing; it was writing that was below even my minimal standards. And he knew that I knew that.
I thought about him the other day when I read a Bloomberg column that was sloppily headlined …
Amtrak Serving Free Wine to Steak Loses Millions on Food
OK, Bloomberg, what the hell do you mean “free wine”? Are you talking about the wine tastings on the Coast Starlight and the Empire Builder? Those wines are provided at no cost to Amtrak by the various wineries in exchange for the promotion. And wine sure isn’t free in Amtrak dining cars where a half-bottle goes for 15 bucks.
And “free steak”? That’s really a cheap shot because surely you must know that when I travel in an Amtrak sleeping car, the cost of my dining car meals is included in the cost of my rather pricey ticket. And coach passengers pay the full menu prices for their meals, including the steaks, which, I believe, go for $27.95.
Yes, Bloomberg is right: Amtrak does lose money on food service. But imagine the complexity of serving thousands of meals every day, morning, noon and night, in rolling restaurants all across the country.  Imagine, too, how many more millions Amtrak would lose in lost ridership if they cut back or eliminated food service. And, yes, some of the Republican geniuses in Congress are actually advocating that.
Of course, a number of other publications around the country also ran the Bloomberg story, so you can imagine how that absurd and inflammatory headline set off the anti-Amtrak, Tea Party, ultra-right, libertarian wackos … the people who pound out their comments in all caps and hate the “gubmint” and think that calling some rail project a boondoggle is actually a valid argument.

Thanks a lot, Bloomberg … It is to weep, dammit!

Previous How to Make the Case for Public Transportation … And Never Say a Word.
NextThe Case for Trains? People Are Starting to Get it!