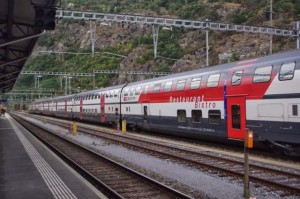 When I boarded my train in Brig on the way to Lausanne, this was sitting on one of the other tracks. It was there when I arrived at the station and it was still there when I left on my train a half hour later. That restaurant/lounge car is in the middle of the train, so it’s fair to say that there were as many as 18 of those bi-level coaches in the consist.

In retrospect, I should have found a knowledgable official that morning and said, “What the hell is that thing doing here? Where is it going? And how is it that a train with that capacity originates in a town of 25,000 people?”

I have emailed a contact with the Swiss railroad that operates the Glacier Express and I’ll pass along whatever he tells me.

Previous Learning About Fine Wine … and What It Costs.
NextFrom Paris to Copenhagen, Fueled by a Little Mystery Meat.