Who Is This Man and Why Should We Envy Him? 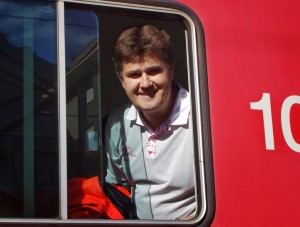 His name is Martin Gasser and he’s a Swiss railroad engineer — they call them”drivers” in this part of the world. For a few days every week, he’s at the controls of the locomotive hauling the famous Glacier Express as it twists and turns for 180 miles through the Swiss Alps from St. Moritz to Zermatt. And for an unforgettable hour and 15 minutes on this glorious Fall afternoon, I was permitted to join him. 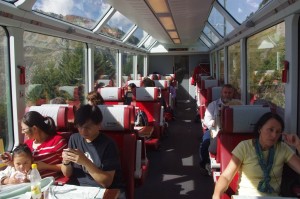 I boarded the Glacier Express in the town of Chur and settled into a comfortable seat in one of the two first class coaches. Without doubt, these railroad cars were designed for viewing. The windows are huge and, as you would expect from a Swiss train, sparkling clean.

After an hour of gaping at the passing scenery, drink orders were taken and lunch was served. By this time, the train had slowed and begun its climb toward  Oberalppass, at 6,670 feet is the highest point on the route. The landscape here is staggering: rugged peaks all around us, with scatterings of tidy houses and barns clinging precariously to steep emerald green flanks of the mountains. The valley floor is more than a thousand feet below. 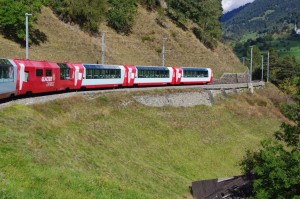 This isn’t a fast train — it averages just 25 miles an hour because of the curves and he grades — nor is it a very big train. One locomotive hauls two first class coaches, a service car where the food and drink is prepared, and three second class coaches. That’s it … and, in fact, that’ all that physics will allow. If the Glacier Express were to exceed 135 tons in total weight, the locomotive wouldn’t be able to get up several of the steep grades. One more coach and it would be over the limit. 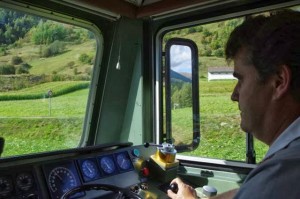 Finally, at Münster, a representative of the Matterhorn Gotthard Bahn, Christoph Andereggen appears in the doorway of the coach to escort me up to the locomotive for the 80-minute ride into Brig. We clambered up the metal ladder, shuffled sideways through a narrow passageway and into the locomotive cab where I shook hands with The Man… the engineer of today’s Glacier Express, Martin Gasser. 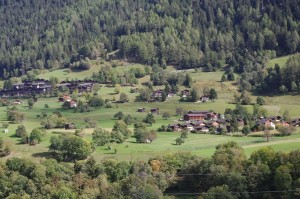 The next hour flew by. I snapped photographs and asked questions, Cristoph provided answers, often checking with Martin who responded in the softer German dialect unique to this part of Switzerland. And much, much too soon, it was over.
One last question had not been asked. As I was leaving the cab, I asked Martin if the kids in his neighborhood thought he had the very best job in all of Switzerland. He didn’t say anything. He didn’t have to. He just grinned.

Previous Paris to Zurich to Chur … Oh, my!
Next“OK, We’re in Zermatt. Now What?”