Why Do House Republicans Hate Amtrak’s Subsidy, But Not All the Others?

Jim Loomis August 13, 2013 Amtrak 1 Comment
Some of the loonier members of Congress – and, sorry, but just about all of those are Republicans – get their boxer shorts all twisted up in knots when it comes to Amtrak’s annual subsidy.  They hate it. They obsess over it. And every year they try to reduce it. This year, a couple of bozos in the U.S. House actually submitted bills that would eliminate Amtrak’s subsidy altogether, which would almost certainly mean the end of Amtrak’s long-distance trains. 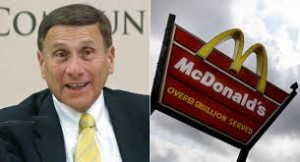 Photo: King of the Photo-Op and Bozo-in-Chief, Congressman John Mica (R-Florida), says he can’t understand why McDonalds can sell a Big Mac for less than Amtrak can sell a burger in a dining car traveling at 80 mph across Montana.
The problem is, those trains are in many cases the only public transportation for literally millions of Americans in smaller towns and cities all across the mid-west and west. Furthermore, it’s an accepted and legitimate role of government to make sure that essential transportation services are available to as much of the population as possible.
But why do the Republicans bitch and complain about Amtrak’s subsidy, and never utter a peep when the government shells out millions to subsidize the airlines?
As just one example, the U.S. government subsidizes air service to two smallish cities served daily by Amtrak’s Southwest Chief – Dodge City and Garden City, both in Kansas. The combined Essential Air Service subsidy last year just for those two towns came to $4,607,624.  As the venerable Casey Stengel once famously said, “You could look it up!”
It’s amazing how many people don’t know that. But members of Congress do. So, I ask again, why do the Republicans object to Amtrak’s subsidy and not to the subsidy the airlines get? Anyone?