Jim Loomis July 18, 2013 Amtrak 5 Comments
I like the on-line magazine, Slate, which consistently offers interesting and provocative articles on a wide variety of topics. For instance, in the aftermath of the George Zimmerman acquittal, there’s a piece posted now that asks how often juries actually make the right decisions.
Another story is about Liz Cheney officially announcing that she’s running for the Senate seat in Wyoming … running against an incumbent fellow Republican, Senator Mike Enzi, who happens to be a close friend of Liz’s father, Dick Cheney. Uh-oh!

But there’s also a snotty column by writer Matthew Yglesias who petulantly complains that Amtrak over-organizes the boarding procedure in New York City’s Penn station … forcing people to wait in line in the main concourse, have their tickets checked, then following an Amtrak employee down one of the escalators to the platform below where the train is waiting.

Apparently, Yglesias’s is pissed because Amtrak has implemented a system that boards passengers at its busiest stations in an efficient and orderly manner. He, on the other hand, would prefer being free to wander down onto the platform whenever he feels like it. Or not.

(For unknown reasons, this program suddenly changes fonts, as in the above paragraph, and refuses to let me change back. I hope it doesn’t bother you; it bothers the hell out of me!)

But can we not agree that there are those out there among us who, sadly, cannot match what I’m willing to concede are Yglesias’s superior intellectual standards? Consider, for example, a not-so-hypothetical elderly woman — frail, a bit unsteady, and wearing a hearing aid. She speaks several languages fluently, but minimal English. She knows it’s close to her train’s departure time, but she’s confused, fails to hear or understand the boarding announcements, and goes down the wrong escalator. She ends up dazed and panicky … and on the wrong platform.
Thankfully, an alert Amtrak employee spots the confused woman, checks her ticket, and determines that her train is close to departing, but on another track. He speaks briefly into his radio, then escorts the woman up an escalator, across the concourse, and down another escalator to her train. 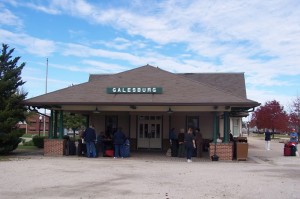 Isn’t there are pretty clear distinction here? There may be no problem in letting 14 passengers walk out onto the platform to wait for the Southwest Chief in Galesburg, Illinois, but quite another if it’s in Penn Station and 184 people are waiting to board an Acela high-speed train headed for Washington.
If you were a personal injury attorney, in which station would you prefer to hang around looking for potential clients?

Previous Now I Lay Me Down to Sleep … on an Inflatable Pillow??
NextIf You Build It (and Speed It Up), People Will Come.