Now I Lay Me Down to Sleep … on an Inflatable Pillow?? 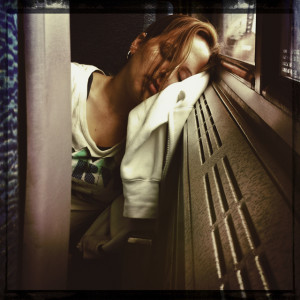 Amtrak is about to stop providing complimentary pillows for coach passengers on long-distance trains.  Instead, something euphemistically called a Passenger Comfort Kit will be available for purchase and will include an inflatable pillow, a blanket, an eye shade and ear plugs.

Obviously, this is a cost-cutting effort. According to an Amtrak official, it will save Amtrak almost a half-million dollars a year, not counting whatever revenue may be generated by selling the so-called “comfort kits”. 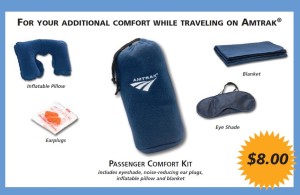 But let us assign the blame for this chiseling of the beleaguered coach passengers where it really belongs: to the willfully uninformed ideologues in Congress, led by the loud-mouth grandstanding bully, Rep. John Mica(R-Florida). These people are unrelenting in their badgering of Amtrak and in their constant efforts to force short-sighted cost-cutting measures that erode the quality of the travel experience for passengers.
After all, it was to save money that dining cars on most of Amtrak’s long-distance trains stopped serving meals on real china. Instead we now get disposable plastic dishes so we don’t have to spend money on an additional employee to wash those dishes and help an already overworked chef.
Getting back to the pillow issue, I must confess that my first reaction was one of outrage.  It’s one thing for the airlines to cut back on basic comforts such as these, but most of us can tough it out on a flight of a few hours. But overnight – or even two nights — on a train? That’s something else entirely.
I still think it’s a bad idea, but the reality is that many coach passengers are already bringing their own pillows on board. Blankets, too. And who knows? Maybe these Passenger Comfort Kits will do the job, although I find it hard to believe that an inflatable pillow can possibly be a reasonable alternative to one of foam, let alone feathers.
Time will tell. In the meantime, anyone out there who thinks “Pillow-gate” will appease John Mica and others of his ilk will be mistaken. Mica will retain his title as Congressional Amtrak Basher-in-Chief as long as his antics continue to be reported in the media. Or until anything more than half of his constituents get fed up.