THE FIVE MOST SCENIC TRAIN RIDES IN NORTH AMERICA.

Jim Loomis June 24, 2013 Amtrak, Canada, Great Rail Journeys, Most Scenic Train Rides, Sleeping Cars, Train Travel Advice, VIA Rail Canada 8 Comments
I’m often asked which are the top few scenic train rides in North America. The shorter the list, the harder it is to choose, but here are my picks.

5. The Cardinal. This train operates three days a week between New York and Chicago on a meandering route through some lovely country. After leaving Washington, the Cardinal takes you over the Blue Ridge and Allegheny mountain ranges, then through the New River Gorge.  (Photo above: You can just see the train tracks way down there.) The Cardinal runs only three days a week, which can complicate connections, but I’ve been known to stay an extra night in Chicago just to take this ride. Tip: Book the Cardinal as far in advance as possible. It’s not a big train and there is usually only one sleeping car.

4.  The Skeena.  This train is operated by Canada’s VIA Rail and runs three days a week between Jasper, Alberta and Prince Rupert in British Columbia. It’s a two-day trip with Day One taking you about halfway to the town of Prince George. There are no sleeping cars on this train, so everyone spends the night in a hotel. The next morning, it’s back aboard for the completion of the journey. Jasper is at the eastern edge of the Canadian Rockies and Prince Rupert is on the ocean. In between are spectacular mountains and dense forests. I’ve only taken this train once, but can’t wait to do it again. 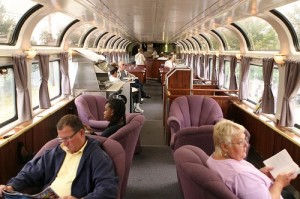 3. The CoastStarlight. I’ve put this train in third place because the emphasis here is on “scenic”.  But, truth be told, this is my favorite Amtrak ride … the difference being that it’s the only train in the Amtrak system that carries a parlor car (above) for the exclusive use of sleeping car passengers. The northbound train runs along the Pacific Ocean coastline, then cuts inland and, on the second day, takes you through the magnificent Cascade Range of Oregon. I get up on the morning of that second day, relax in one of the comfortable booths in the parlor car, and order up a Bloody Mary from the parlor car attendant and think about what I’d like for breakfast. Can you think of a better way to travel?

2. The CaliforniaZephyr.  I know, I know: this train can be hours late. But there’s so much out there to gaze at, what does it matter? The westbound Zephyr will be crossing the Mississippi River about the time you’ll be heading for the dining car where a steak dinner awaits. The next morning, just minutes after you leave Denver, the Zephyr starts the long climb into the Rockies, the follows the Colorado River for a hundred miles to Glenwood Springs. The next day, the Zephyr crosses the Sierra Nevada mountains by way of Donner Pass, then winds its way down through redwood forests to Sacramento and, finally, to the Bay Area. 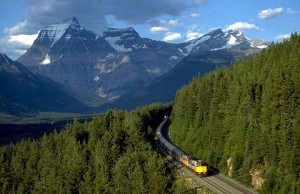 1. The Canadian. This is VIA Rail’s premier train, which runs three times a week (twice a week in the winter months) between Toronto and Vancouver. The train itself is a gem: stainless steel coaches and sleepers, including several classic dome cars. Westbound, it’s farmlands, then forested wilderness, then the great plains, then the Canadian Rockies, then the glorious Fraser River Valley and, finally, Vancouver.  And  — Oh, yes — the dining car food is superb! Tip: fares are pricey during the busy months, but you can save a lot by avoiding those times – (usually) May through September.
There you have ‘em.  All of those trains are well worth the doing … and every one belongs on your bucket list.