Jim Loomis June 13, 2013 Amtrak, Dining Cars, Long-Distance Trains, Sleeping Cars, Viewliner 30 Comments
With ridership numbers that have increased in 19 of the last 20 years, Amtrak has a pressing need for new equipment.  Many of the bi-level Superliner cars still being used on long-distance trains date back to the 1970s. They’ve been renovated and refurbished, of course – many of them more than once – but they’re still showing their age.
Happily, more newequipment is coming. Amtrak placed an initial order with car builder CAF for 130 new Viewliner II cars. There’s also an option of 70 more. We recently had a preview with photos of full-scale mock-ups:

The newly designed Viewliner roomette no longer includes a toilet. 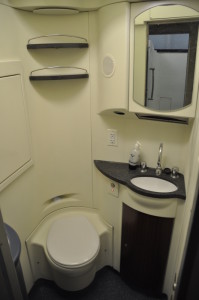 The public lavatory looks pretty much like the facilities on the Superliners. 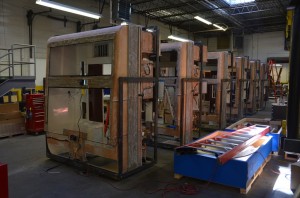 Everything is of modular design, so roomettes are built separately as a complete unit, then set into place. Additional benefit: maintenance is faster and easier … and cheaper. 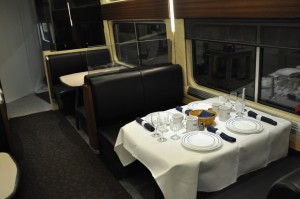 A mock-up of the new Viewliner dining cars. Wouldn’t it be nice if they really did come with real china and glassware!

The overall design is clearly more modern than the original Viewliner, and there is one notable difference: the toilet and sink are no longer included in the roomettes. Personally, I think this is an improvement. Going “down the hall” to the lavatory may be a minor inconvenience for some, but the roomettes are now more spacious and using the toilet when two people occupied the roomette was always awkward if not unpleasant. Besides, Superliner roomettes have no en suite facilities and that’s never been a problem.
Last I heard, the first of the new Viewliners was scheduled for delivery around the middle of this year.  Looks like there will be a delay, but the sooner the better. I’m booked on the Silver Star from New York to Jacksonville around the middle of October.  It would sure be nice to find myself traveling in one of the new Viewliners!

Previous When It Comes to Trains, Railfans Can Be Real Fanatics.
NextThe Slower We Go, The Behinder We Get.