Photos from On Board the Southwest Chief and the Canadian 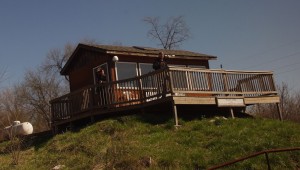 The Depot Inn & Suites in La Plata, Missouri is a railroad-themed hotel with interesting memorabilia on display throughout the facility. And, within a hundred yards of so of the hotel is this lookout, a small structure, heated in winter and cooled in summertime, that overlooks the Burlington Northern Santa Fe main line. Train enthusiasts can hang out here and get plenty of opportunities to watch BNSF freights
passing by just a few yards below. (There’s one now!) I took this photo from Amtrak’s Southwest Chief en route from Los Angeles to Chicago. 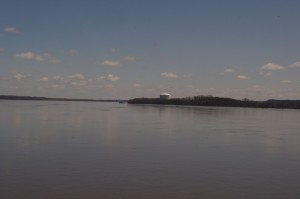 Minutes after departing Fort Madison, Iowa, and just as I’m summoned to lunch in the dining car, the Southwest Chief crosses the Mississippi River and enters the State of Illinois. (This river truly deserves to be called “The Mighty Mississippi”, doesn’t it!) We’ll be in Chicago, end of the line for the eastbound Chief, in just four hours. 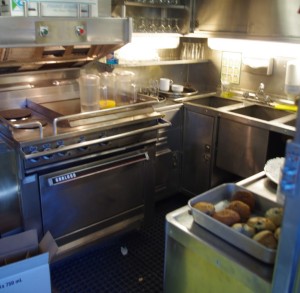 Days later, I’m heading west again aboard VIA Rail’s Train # 1. As mentioned in an earlier post, this train featured two dining cars and four dome cars. Each of the latter features a lounge area and a compact galley where pastries and fruit are prepared. 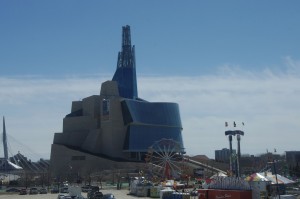 There is only one word to describe the Canadian Museum for Human Rights in Winnipeg: incredible. Well, actually,   there are a lot more words that come to mind. Frankly, can’t decide if I admire this huge building … or if I absolutely hate it, but it’s just a few hundred yards from the Winnipeg railway station and you sure can’t miss it! This photo was taken from my “cabin for one” as the train was resuming its journey to Vancouver and the Pacific.