Jim Loomis April 22, 2013 Amtrak, VIA Rail Canada 2 Comments
Today I’m in Alexandria, Virginia, just a few miles from Washington, to attend the semi-annual meeting of the National Association of Railroad Passengers. For the fourth year in a row, we’re at the Hilton Old Town hotel. It’s literally a stone’s throw from the Alexandria railroad station, which is jointly used by Amtrak, commuter trains, and DC’s transit system, the Metro. 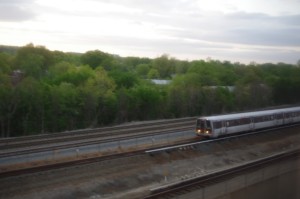 The hotel management was mystified the first time we stayed here because everyone making a reservation requested a room facing the railroad tracks. There are, in fact, five parallel tracks just below my window.
These meetings are interesting. There are always interesting outside speakers and among the NARP people attending there is a wide variety of railroad expertise. There are bone fide transportation experts in our bunch … people who are interested in “connectivity” and “mobility” and “running times”. They talk about Amtrak’s “below the rail” costs and why “cost per passenger mile” is a far better measurement of the railroad’s efficiency than “cost per passenger”. A lot of that is way beyond me, but I confess that I do find it all interesting and educational.
Me? I enjoy discussing the fun stuff: traveling by train. And there are people here who know plenty about that, too. I spent several minutes this afternoon talking with Carl Fowler, longtime NARP member and president of Rail Travel Adventures. Carl has been selling (and escorting) rail tours for years and no one knows more about train travel. 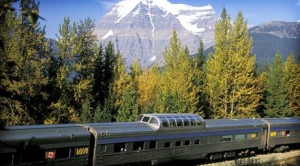 He had heard that at the end of the month I was going to be taking VIA Rail’s fabulous trans-continental train, the Canadian, from Toronto all the way across to Vancouver, and we had a vigorous discussion about whether it was better to go from East to West or in the opposite direction.
I have always claimed the westbound trip is better because the scenery keeps getting better as you go: from fertile farmland to forested wilderness to the great plains to the Canadian Rockies and, finally, down through the beautiful Fraser River Valley to the Pacific Ocean and Vancouver.
Carl acknowledges that, but points out quite correctly that if the train is late by the time it gets to Jasper, Alberta, you’ll pass through most of those magnificent mountains in the dark. On the eastbound train, however, you leave Vancouver late in the evening and almost the entire next day is spent winding through those mountains. He has a point.
We did agree on one thing: It’s a fabulous ride — no doubt one of the ten or twelve best rail journeys in the world — and the best solution would be to take the train in both directions.

Previous The Luck of the Draw in an Amtrak Dining Car
NextZoom! Washington to Boston on Amtrak’s Acela.