Paying for a Amtrak Sleeper on a Daytime Ride?

Jim Loomis March 25, 2013 Amtrak, Pacific Parlour Car, Sleeping Cars 3 Comments
Conventional wisdom says you should not pay the extra charge for space in an Amtrak sleeping car unless you’re going to be traveling overnight.
Well, sure … but, as with all general rules, there are exceptions. 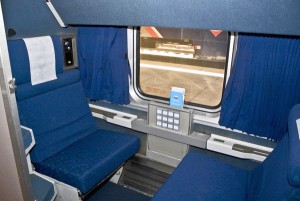 For instance, back in November, I booked Amtrak’s train #11, the Coast Starlight for travel last week from Davis, California, to Los Angeles. The basic rail fare, which buys a seat in coach, was $84; the supplement for upgrading into a roomette (above) was $92. So why would I pay extra for the roomette when I wasn’t going to be traveling overnight and in need of a bed to sleep in?
Well, first, it’s 6:50 a.m. when the Coast Starlight arrives at Davis and it doesn’t get to Los Angeles Union Station until 9:00 p.m. That means I’ll be having three meals in the dining car … meals that would cost me about $60 if I had to pay for them. (And, no, that does not include a $15 bottle of merlot to accompany my flatiron steak at dinner.)
But, of course, if I’m traveling in a sleeper, all my dining car meals are included in my fare … so now the actual extra cost for the roomette is reduced to $32. So what am I getting for those extra dollars?
First, I have the privacy of my roomette. No fussing kids in the seat behind me, no 300 pound biker who hasn’t bathed for four days sitting next to me. 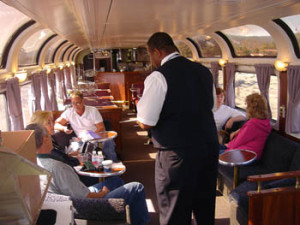 Second, at about 3:00 in the afternoon — see above — there will be a wine and cheese tasting which is only for those passengers traveling in one of the sleeping cars.
And third, that happy event takes place in the Pacific Parlour Car, an undeniably luxurious feature found only on the Coast Starlight and which is available only to sleeping car passengers. These wonderful rail cars have plush swivel chairs, comfortable booths where you have the option of taking your (free) meals. And there is an attendant to serve those meals and to look after any other needs … such as, for instance, preparing an excellent Bloody Mary for me shortly after I boarded and which I happily sipped until deciding I was ready to order breakfast.
Now … tell me all that wasn’t worth the extra 32 bucks!