Learning to Live With an Active Volcano.

Jim Loomis February 08, 2013 Hawaii 0 Comment
A little over thirty years ago, my father-in-law retired and he and his wife moved from their long time home on Oahu to the Island of Hawaii, known to all of us here simply as the Big Island. Their house in Kealakekua had a sensational view of Cook’s Bay, two miles off in the distance and a thousand feet below them. You could see porpoises frolicking in the bay while standing on their deck with a cold beverage in hand. Out farther, in the ocean, you could even see pods of humpback whales during the winter months. And when you looked up at night, you could see the Milky Way, a great glittering smudge stretching across the heavens. The air was that crisp and clean and clear. 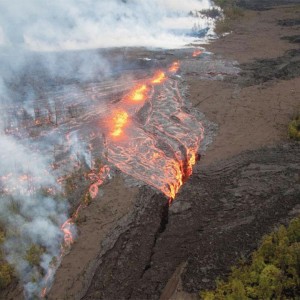 Then, just a few months after my in-laws had settled into their retirement, the volcano, Kilauea, erupted and began pumping out lava. And steam. And smoke. It’s been doing that ever since, and the air is no longer crisp and clean and clear. For as long as they stayed in their home in Kealakekua, Bob and Anna lived with constant haze, which we call vog … short for volcanic smog. On days with very little breeze, we even get it here on Maui, and we’re 100 miles from the source. 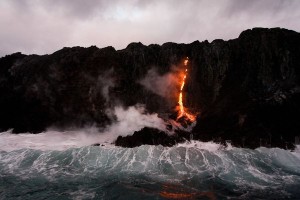 The lava flow has varied in output, and the flow keeps changing direction, but it’s never stopped. Not long ago, as it has done several times in past years, the molten lava found its way to the rocky shore and, spilling over the edge into the sea, sent angry clouds of steam hundreds of feet into the air. And it’s relentless. Not quite a year ago, the lava reached and consumed the last remaining house in the Royal Gardens subdivision. Seventy-four dwellings had gone before it.

After thirty years, Kilauea and the vog are pretty much taken for granted here. And the truth is, a lot of people on the Big Island would just as soon that it kept right on erupting for the foreseeable future. It’s good for tourism … and spectacular sunsets.

Previous Cars vs. Trains = No Contest!
NextComing to Hawaii? OK, But Watch Your Step!