An Educational Breakfast in an Amtrak Dining Car

Jim Loomis January 30, 2013 Amtrak, Dining Cars, Sleeping Cars 2 Comments
A few years ago, I was on the eastbound Lake Shore Limited headed for Boston. I had just entered the dining car, eager for a good breakfast, and was ushered to a table where a young man in his 20s had already been seated. After the usual where-are-you-headed conversation, the young fellow told me how he had manipulated the system to save money on his fare. He was quite smug about it. 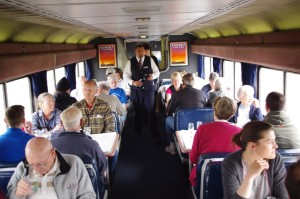 Like me, he had boarded the train in Chicago, but was headed for New York City. However, while I had one through ticket for a sleeping car roomette all the way to Boston, he had purchased two tickets for his ride to Penn Station. Ticket Number One had him in a roomette from Chicago as far as Buffalo, which was then about an hour up ahead of us. But from Buffalo on into New York’s Pennsylvania Station, his second ticket was for a seat in coach … and coach travel, of course, is much cheaper.
I can’t remember how much money he told me he’d saved on that trip, but I checked current Lake Shore fares for travel in mid-February.
The fare for one adult traveling in a roomette all the way from Chicago to New York City is $511. That same roomette from Chicago to Buffalo is priced at $253 and a coach ticket from there to Penn Station is just $50. In other words, switching to coach at Buffalo would save more than $200.
But here’s what I remember most about that young man in the Lake Shore dining car. The train doesn’t get to Buffalo until about 9:00 a.m. By not making the switch until Buffalo, he had time to have breakfast in the diner while he was still traveling on a sleeping car ticket. And dining car meals are free for sleeping car passengers!
I don’t know where that kid is today, but I’ll bet he’s working on Wall Street.

Previous Random Thoughts of Hawaii in Days Past
NextThe French? What Can They Possibly Teach Us?