The Journey Continues: Banff to Jasper and Beyond

Jim Loomis August 19, 2012 All Posts, Canada, Sleeping Cars, VIA Rail Canada 3 Comments
The Rocky Mountaineer stopped in Kamloops for our first night and, since there are no sleeping cars on the train, we were all bussed to one of the local hotels for the evening.
The next day, it was back aboard for a full day of magnificent scenery and fabulous food, concluding with our arrival in the resort town of Banff well after dark. I had decided to splurge on the hotel for the one night we would be here and booked a room at the Fairmont Banff Springs hotel. Was it worth some $300-plus for that one night? You tell me … 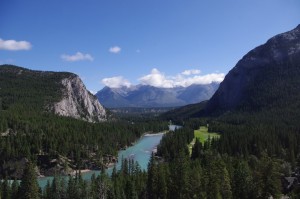 This was the view that greeted us when I opened the bedroom curtains the following morning.

After breakfast, we piled into our rental car and headed off to see more of this part of Canada. First stop was the town of Rocky Mountain House … and, yes, that’s the name of the town. It’s well out onto the Alberta plains in horse-and-cattle coutry, and we had dinner that night at a Boston Pizza restaurant with country-western music blaring. Only a third of the tables were set up due to a “server shortage”, although it sure appeared as though a full complement of servers were taking care of the fellas in an adjacent room featuring a juke box and several pool tables.

The next day we headed off to Jasper where we were to connect with the Skeena, a VIA Rail train that would take us to Prince Rupert, British Columbia … all the way back on the West Coast. 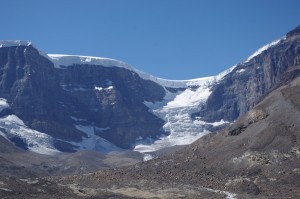 To get there, we had to drive much of the way via the Ice Fields Parkway. As you can see, there were some pretty spectacular sights along the way. In all, the drive to Jasper took almost four hours.
﻿The following morning, we reported to the VIA Rail station and no sooner had our bags been checked and we settled into our seats in the waiting room than the Skeena was brought into the station. There, at he end of the consist, was the classic bullet-ended lounge car that brings up the rear on VIA Rail’s signature trains and features that wonderful sight-seeing dome on the second level. 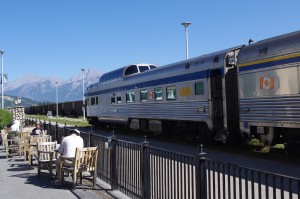 We boarded at 12:30, were underway spot on time at 12:45, and by 1:00 were being served lunch in our seats in the coach car reserved for passengers traveling in “touring class”. In all, there were just 10 of us.
As soon as our meal was finished, I headed back one car to the lounge car, climbed up the narrow stairway into the dome, and settled into a seat in the very front row. 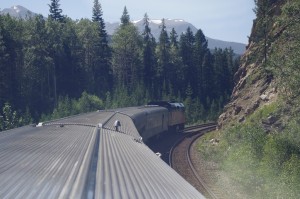 Can you imagine how someone addicted to rail travel feels spending the better part of two days traveling through the Canadian Rockies with this as my vantage point?
Adding to the sheer pleasure of the experience, our car attendant, Jill, would appear from time to time to ask if we would care for some refreshment: “A glass of chilled white wine, perhaps?”
Ya think??

Previous First Comes Amtrak, then the Rocky Mountaineer.
NextPrince Rupert to Port Hardy on the Inside Passage