It really does appear that California will get its high-speed train! The California Assembly – first the House and now the Senate – has given final approval to the project in final do-or-die, put-up-or-shut-up votes. Mostly, with only a couple of exceptions, the votes were along party lines: Democrats in favor, Republicans opposed. Hardly a surprise. 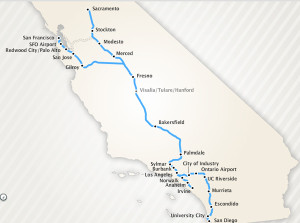 More than we can possibly imagine was at stake with this final decision. Of course it means that California will be getting its high-speed rail link, initially between Los Angeles and San Francisco. But even more important, this is going to lead to more high-speed rail projects in other parts of the country. Why? Because Californians are going to love their bullet train! Millions of them will ride it, and that’s going to lead to more high-speed rail lines being built in other areas of the country. Because success breeds success.

For example, a recent study has concluded that high-speed rail in the South could successfully connect Jacksonville with Atlanta and Memphis. There have been other proposals, too: among others, a bullet train in Texas linking Dallas-Fort Worth with Austin and San Antonio. (This is not a new idea, by the way. It was first proposed decades ago and was killed largely because of intense lobbying by Southwest Airlines.)

At any rate, here’s to the brave California legislators who stood up and did the right thing in spite of all the hysteria and deliberate misinformation. A decade or two from now, people will wonder how the vote could possibly have gone any other way.

Previous Choosing Between Coach and Sleeping Car
NextConfession of an Unrepentant Yankee Hater.