Who’s Really Behind the Anti-Rail Campaign in California?

A lot of the opposition comes from uninformed individuals whose argument is pretty much limited to describing the project as a “boondoggle”. As shallow as that is, it’s being repeated often enough and loud enough, and it’s having an impact. 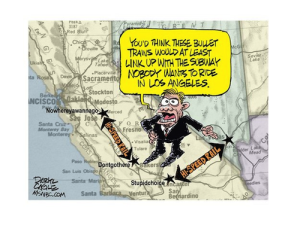 But there is another, more organized effort being waged that’s also having an effect, and it’s keeping all those boondogglers riled up and baying in full throat. This second organized campaign involves the Reason Foundation, the Heritage Foundation, the Cato Institute and numerous other ultra-conservative “think tanks”, all of which advocate an ultra-conservative and/or Libertarian philosophy.

It’s important to realize that much of the funding for these “foundations” comes from oil companies, several of the major airlines, the highway lobby and, of course and in particular, from the infamous multi-billion dollar Koch Family Foundation.

They provide ready-made “studies” for anti-rail groups, churn out op-ed columns for major newspapers, write letters-to-the-editor, and blog on the internet … and it’s all from the same sheet of music. They wail about the cost of the project, predict that no one will ride the system, and rant about the likelihood that government subsidy may be involved.

But here’s the thing … they never address the one critical question which, in a perfect world, should be driving this entire discussion:

How is California going to provide mobility for the additional 20-30 million people that will swell the state’s population over the next several decades?

Of course, absent any reasonable alternative, more and more highways will have to be constructed and, even in today’s dollars, highways can cost as much as $75 million per lane, per mile. In other words, alternatives to high-speed rail will be more expensive, not less.

No matter. The special interests are doing their best to kill rail and they are doing it for both selfish and ideological reasons. Further, and to their great discredit, they are doing it with misinformation and deception. If they succeed, the vast majority of Californians will pay the price, literally and figuratively, for generations to come.

Previous The National Review Takes a Swing at Amtrak … and Misses!
NextShameless hypocrisy about transportation subsidies.