A Near-Miss by Amtrak’s Coast Starlight

Jim Loomis May 07, 2012 Amtrak, Long-Distance Trains 2 Comments
For years now, whenever I travel on one of Amtrak’s long-distance trains, I carry a scanner. It’s a device that can pick up radio transmissions among the operating crew members (conductors and engineers) and between the engineer and the dispatchers who control the train’s movements. Probably 98-percent of the conversation is brief, routine and boring.

But every so often, it can get interesting. You learn why a delay is occurring or hear the engineer asking the dispatcher to contact the state police to have a couple of cops meet the train at the next station and remove some clown who is annoying other passengers in the lounge car. 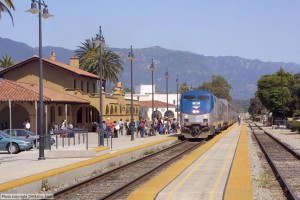 I had my scanner on last week when I was aboard the Coast Starlight en route from the Bay Area to Los Angeles. Just as we were departing Santa Barbara, I picked up the following:

Engineer: Whoa! Look at this idiot on the bike!

Engineer: Rode about eight feet right in front of us.

Conductor: That’s Santa Barbara for you.

Engineer: He had a Giants hat on. Maybe that’s the problem.

I’ve written here on several occasions about the terrible problem of grade crossing accidents and, especially in recent years, the increasing number of people hit by trains while walking on the tracks and listening to music through ear buds. And, also tragically, there are the suicides.

Then there are the idiots … candidates for the Darwin Award. I happened to see this one. As soon as I heard the conversation between the engineer and the conductor, I looked out my window. Sure enough, there he was, a young man probably 18 or 19, nonchalantly peddling off down the street with a book bag slung casually over his shoulder. He was damn near killed and didn’t even know it.