Trying to make sense of the anti-rail arguments.

Various Honolulu city administrations have been trying to get a transit system built in Hawaii’s capitol city since the mid-1970s. Twice the project failed by one vote on the Honolulu City Council, but a few years back it finally got the green light.

That, of course, brought out the crazies and they have been relentlessly attacking the project ever since. 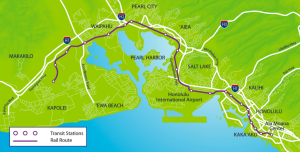 Last week, a member of the City Council, noted for periodic episodes of bizarre behavior resulting in an occasional arrest, organized a town hall gathering featuring two people brought in from the mainland and billed as “transportation experts”. They are, in reality, frauds who have for years made their livings peddling one-size-fits-all anti-rail studies to groups opposing transit around the country. At one time or another, they have been in the employ of Libertarian “think tanks” and/or the highway lobby.

The problem is that the media reports what they say without disclosing their suspect backgrounds and biases, leaving the public to believe their opinions are objective and based on serious study. They are, in fact, neither.

At any rate, at the recent town hall meeting, all the usual anti-transit arguments were trotted out, including the following (summarized by me, but the gist is accurate):

1- Ridership projections have been wildly exaggerated and will be far less than projected.

2- Interior design of the rail cars is faulty and will not provide enough seats for riders.

Uh, wait a minute, fellas … did you mean there won’t be enough seats to handle all those people who are not going to ride the train?