OK, enough about depressing politics and more about some of the railway stations I encountered on my recent train trip across Europe and Asia. In truth, most of the stations we passed through while traveling between major cities were pretty ordinary. 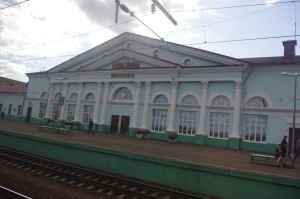 Here’s a good example: the station in the town of Vyazma, a busy railway junction. The train I took from Berlin to Moscow stopped here for servicing. The station itself is a good-sized building, reasonably well kept, but strictly utilitarian. Two main line tracks with basic concrete platforms. 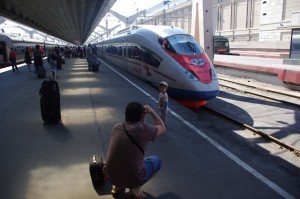 The station in St. Petersburg – formerly Leningrad – has a large waiting room, but there’s nothing special about it. However, unlike the U.S., at major Russian stations, passengers pass their bags through a security check prior to boarding trains. By the way, Russian Railways ballyhoos this as a high-speed train, but it didn’t appear to me that we ran at much over 100 mph at any point during the 4-hour ride to Moscow. 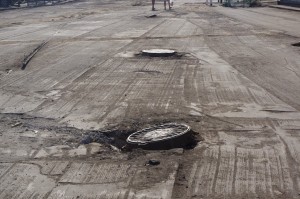 Maintenance, anyone? This is the parking lot outside the Kazan station in Moscow, where we boarded the train that would take us all the way to the Chinese border. To be fair, this is not one of the main stations in Moscow, but the building itself also appeared to be pretty much neglected.

Despite that, a nice incident took place while we were waiting inside the station near the platform for our train. For no apparent reason, I was approached by a middle-aged man who had obviously spotted us as tourists. He spoke almost no English, but we soon established that I was an American and from Hawaii and he was from the Ukraine and had two children. Then, suddenly, our train arrived and we had to leave. My new Russian friend shook my hand and beamed. “Long live friendship!” he said. And he walked away. 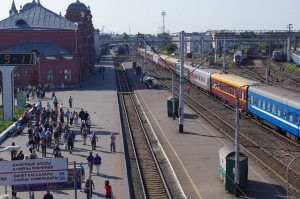 I took this photo from a pedestrian overpass at one of the Russian stations along the way. That’s our train to the right. To get to the station’s waiting room in the brick building, we climbed a long flight of steps (72 by my actual count), continued along this overpass, and clambered down another flight of 72 steps. I mention this because one of the men in our group had limited use of his legs and was in a wheelchair … and because this station was typical. At most of these stops, the poor man had to get out of his chair and, with one of us on each arm, struggle up one flight and down the other. In the U.S., we take wheelchair ramps for granted as we pass through our airports and train stations. The entire time I spent in Russia, I didn’t see one.