Toronto’s downtown skyline is dominated by towering high-rise office buildings as befits this center of business and banking. With more than 5 million residents, this is Canada’s biggest city and the fifth largest in North America. And, as local folk are quick to tell you, Toronto boasts both a high standard of living and a low crime rate. 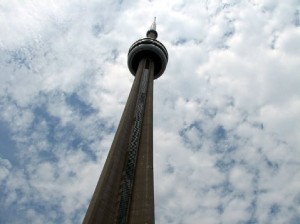 The dominant feature here is the freestanding CN Tower, over 550 meters high. On a clear day you can see the far shore of Lake Ontario from an observation deck featuring a glass floor. If you don’t have a fear of heights before you step out onto it, you likely will forever after. 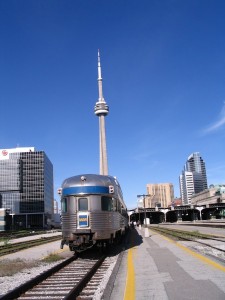 The next morning brings clear blue skies and bright sun, a perfect day to begin the last and longest leg of my trans-continental rail journey, a three-night trip to Vancouver aboard VIA Rail’s premier train, the Canadian, appropriately designated Train #1.

We’re not yet in the peak travel season, but this is nevertheless a very long train: three diesel locomotives pulling 21 cars, including coaches, sleepers, two dining cars and four lounge cars, each topped with the classic sightseeing dome. 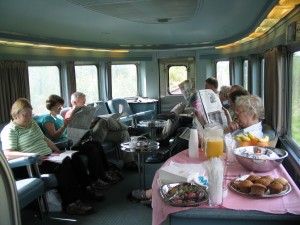 Well before our 9:00 departure time, a gaggle of passengers has filled the lower level of the bullet-shaped observation car on the rear of the train and every seat in the upper-level dome is taken.

At 9:15, a woman asks, with a touch of petulance, “When are we going to leave?” Her husband shrugs then, pointing forward, says, “Whenever. At least we know it’ll be in that direction.” Not 30 seconds later, the Canadian starts moving, but it’s backing up. There’s laughter all around, but it’s an effective icebreaker. A minute later we come to a stop and, after a brief pause, the Canadian begins moving forward, clattering its way through a maze of switches and out onto the main line.