Russia’s Sapsan trains linking Moscow and St. Petersburg sure look like high-speed trains – sleek and streamlined inside and out like the French TGV and the Eurostar, but the trip this morning to St. Petersburg was pretty ordinary, with – just my best guess – speeds topping out at 80 or perhaps 90 mph … and most of the time a lot less than that. Certainly, nothing even close to the 187 mph at which the other European high-speed trains run. But, as has been the case on every train I’ve taken so far, this one appeared to be full and the station was bustling with hundreds of people coming and going.
——————————————————————–
Now, to finish up on the overnight ride from Berlin to Moscow, here are a few photos, the first of the main train station in Berlin. Click on photo to enlarge. 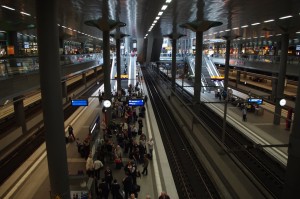 They’re not all visible in this shot, but there are ten tracks on this lower level, with both commuter and inter-city trains coming and going on one or more tracks every few minutes. At street level and on the middle level, there are lounges where train tickets can be purchased, information windows, shops and more than a dozen restaurants. 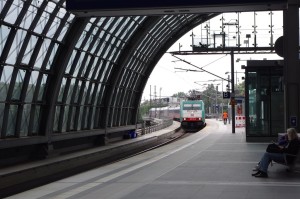 In addition to more commuter and inter-city traffic, long-distance trains come and go on six more tracks on the top level and, in fact, that’s my train to Moscow arriving on Track 11. There were six cars in this consist and another eight were added in Brest. 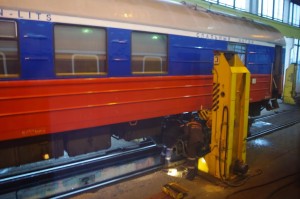 Immediately after being cleared at the Russian border, our train was run into a huge building where each rail car is raised by four powerful jacks so the wheel assemblies (we call them trucks; the term bogies is used in Europe) can be replaced by those that fit the wider Russian gauge. The entire process took less than an hour for all six cars. It was a very interesting process, even at 4:30 in the morning. 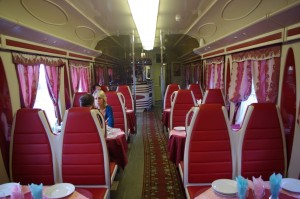 This is Train 443’s restaurant car where I was offered my “no-money” meal (see previous post). For whatever reason, all the windows in the Russian trains are draped and re-draped. I really don’t get that. Isn’t the idea to enjoy the passing scenery?
——————————————————————
At any rate, I am now in St. Petersburg and will be here for some serious sightseeing for the next two days. Then it’s back to Moscow to connect with the private train that will take me all the way to Beijing.