Today was my opportunity to experience three different trains: first the Eurostar from London through the Chunnel to Brussels, then a high-speed Thalys from Brussels to Cologne, and finally a German ICE (Inter-City Express) from there to Berlin. 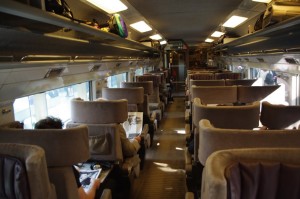 I’ve ridden a Eurostar train several years ago and my first impression when stepping on board this morning was that this particular trainset seemed to be a bit threadbare. Nevertheless, it was an excellent trip with the train zooming through the Channel tunnel at 112 miles per hour, then picking up the pace to 187 mph most o the way on into Brussels. 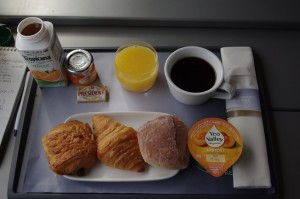 And, since I was comfortably seated in first class, a simple, but very good breakfast was part of the deal. Rather amazing that you are riding along at 187 mph and the attendant is very calmly pouring you a cup of hot coffee. 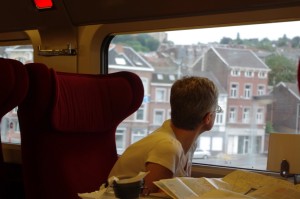 The Thalys trains are operated by the national railroads of France, Germany, Belgium and the Netherlands and link major cities in those four countries. The equipment is very much like the Eurostar, but more colorful. Still in first class; still very nice … especially when a small bottle of very acceptable white wine is complimentary with lunch. 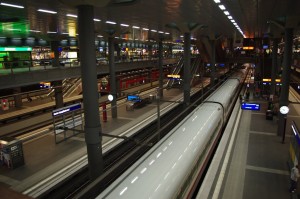 All the rail stations are pretty spectacular. This is Berlin and that’s my ICE train down there. One common denominator for all the stations I saw today: each had a McDonalds or a Burger King or a Pizza Hut and they all appeared to be busy. I dunno … why do I find that a bit depressing?

OK, so now I’m in Berlin and will see some if this incredible and historic city tomorrow.

Previous Day 4 – Checking Out a Little Corner of London
NextDay 6 – A Sobering Step Back into the Time of the Third Reich.