Those of you who stop by here on a regular basis know that Congressman John Mica (R-Florida) is not one of my favorite politicians.

For one thing, Mica never talks about Amtrak without sneering that it’s “America’s soviet-style railroad.” And then he beams when his audiences titter politely in response. 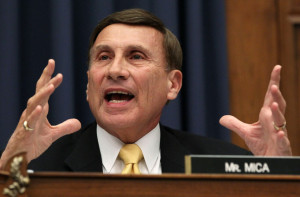 Unfortunately, as the Chair of the House Transportation and Infrastructure Committee, Mica is a force to be reckoned with. Some weeks back, he introduced a bill that would take the busy and profitable Northeast Corridor between Washington and Boston away from Amtrak and peddle it to private operators.

That certainly caused a stir among folks who understand that the U.S. needs the national passenger rail system Amtrak is now providing. They realized immediately that once the profits generated by the NEC are taken away from Amtrak, the railroad’s annual losses would increase dramatically … and that, in turn, would allow Mica and the rest of the anti-subsidy ideologues to justify Phase Two of their plan: killing off Amtrak altogether.

But wait! Comes now the respected, non-partisan Congressional Research Service with a report that says Mica’s privatization scheme is without doubt unconstitutional!

Think of the time and money that have been wasted on a proposal that isn’t legal and won’t work anyway … just so John Mica can generate some headlines and score political points with his conservative base.

Is it any wonder people are fed up and have lost faith in our political leaders?