Off Again – This Time On Amtrak’s Cardinal

After two nights on the Empire Builder and a 24-hour layover in Chicago, I’m ready for another overnight ride. This one will be aboard the Cardinal, which I think is Amtrak’s best-kept secret among all its eastern trains. In my opinion, the eastbound train is the better choice because you will pass through more of the fabulous New River Gorge during daylight hours.

The Cardinal runs in both directions between New York City and Chicago, as do both the Lake Shore Limited and the Capital Limited, but it travels over a longer route and swings much farther south. That longer route, in my view anyway, makes this train special and the best choice if you have a little extra time and are interested in scenery. (See note below.) 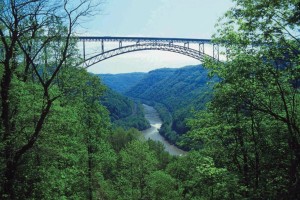 Near Fayetteville, West Virginia, the Cardinal passes under the New River Gorge Bridge. It’s well over a half mile long and almost 900 feet above the river. In the photo above, you can just make out the railroad tracks running along the left (northern) bank of the river.

Later in the day, as frosting on the Cardinal cake, you’ll be in Virginia and crossing the Blue Ridge Mountains. Absolutely lovely!

I’ll be leaving the Cardinal in Alexandria, Virginia, (one stop before Washington’s Union Station) to attend a 3-day meeting of NARP’s* Council of Representatives. The Cardinal will continue on up through the Northeast Corridor and finally terminate in New York City.

One additional note: The Cardinal only runs three days a week, so you may have to adjust your dates or connecting trains accordingly. There continues to be agitation for making the Cardinal a daily train and that would no doubt be a positive change. As always, of course, the issue is finding enough rolling stock. As it is, there is usually just one Viewliner sleeping car in the consist, so if, like me, you usually opt for that comfort, be advised that you’ll need to book the Cardinal well in advance of your travel dates to be sure of getting sleeping car accommodations on your travel date of choice.