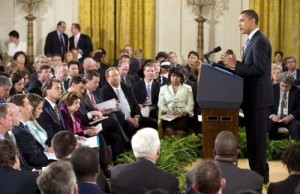 President Obama has stepped up and announced a major high-speed rail initiative that would allow the United States to begin catching up with most of the rest of the world. Given the times and the current emphasis on government deficits, it was a startling announcement: $53 billion to be spent over the next 10 years.

It took guts, too, because a Republican committee recently recommended completely eliminating Amtrak’s annual subsidy, a proposal which would essentially kill America’s national passenger rail system. On the other hand, transportation experts and rail advocates such as the National Association of Railroad Passengers have applauded the president’s bold proposal.

The thing is, there really is no argument. High-speed rail systems like the famous TGV in France and the Shinkasen in Japan have been operating successfully for more than 30 years. Most other European countries have extensive high-speed rail networks and comparable new systems are being built at a furious pace throughout most of the rest of Asia. Within just a few years, China will have more miles of high-speed rail than any other country in the world!

For a look at other systems around the world, take a look at this terrific slide show. If you would like to add your voice in support of high-speed rail un the U.S., consider membership in NARP. You can join by going here. Thanks!