John Kasich: Another state, but just another Bozo. 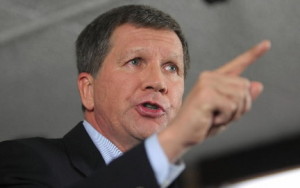 This time it’s Ohio, where Republican Governor-elect John Kasich says he’s not going to let people in a “train cult” stop him from killing a proposed passenger rail line that would connect Columbus, the state capital, with Cincinnati and Cleveland.

As does the just-elected governor in Wisconsin, Scott Walker, Kasick refers to the project in his state as a boondoggle and is apparently prepared to return the $400 million in federal dollars Ohio received for the project. And, like Walker, Kasich had harbored some thoughts of redirecting those funds to other projects. But, as noted in our earlier post, that will not happen — the money will go back to Washington and the DOT will allocate it to one of the other states with a rail project that is moving forward.

Passenger rail advocates reacted promptly to Kasich’s condescending and insulting “cult” remark, with one of the better comments coming from Jack Shaner of the Ohio Environmental Council: “Most Ohioans would call someone wanting to invest $400 million in rail infrastructure and grow 8,000 potential jobs a capitalist, not a cultist.”

It’s just a matter of time, of course, before we read about Kasich crying crocodile tears for the unemployed in his state. (He will no doubt propose tax cuts as the solution.)