Scott Walker: Soon to be Governor, Already a Bozo 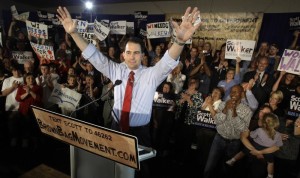 The newly-elected governor of Wisconsin, Republican Scott Walker, has announced that he will not proceed with planning or construction of the high speed rail corridor linking Milwaukee with Madison, the home of the University of Wisconsin.

This corridor was among a dozen or so selected for high-speed rail links by the U.S. Department of Transportation and that meant a whopping federal grant to the state of $810 million. It’s interesting to note that Wisconsin was the only state to be awarded all the money it had asked for from the $8 billion allocated by the feds for the various high-speed rail projects around the country.

Walker won’t assume office until next year, but is already blustering on the subject:

“I am drawing a line in the sand Mr. President: No matter how much money you and Governor Doyle* try to spend before the end of the year, I will put a stop to this boondoggle the day I take office.”

Sorry, but I have no patience with arrogant blowhards like this babooze. Walker is just another right-wing ideologue who is simply not interested in a rational assessment of the project. Rail? No good, he says. End of discussion.

Here’s the kicker: If Walker has any illusions about diverting that money to other projects in Wisconsin — that would be roads, of course — he can forget it. U.S. Secretary of Transportation, Ray LaHood (a former Republican member of Congress, by the way) has made it clear that if Walker rejects the Milwaukee-Madison rail project, every dime must be returned to the DOT in Washington where it will be re-allocated to other states for their rail projects. And what about all those badly-needed jobs that $810 million would have created in Wisconsin? Gone.

You’re really off to a great start, Governor-elect Walker.

Previous Comments (well, most of them) are still welcomed
NextJohn Kasich: Another state, but just another Bozo.