Imagine, if you will, that you’re a U.S. citizen – born and raised – traveling on the Lake Shore Limited from Chicago to visit your ailing mother in Boston. After a so-so night’s sleep in your coach seat, you’re just about ready to head for the lounge car and a cup of coffee. Suddenly, two uniformed members of the U.S. Border Patrol enter the car. They stop at your seat, look you up and down, and one of them demands that you produce proof of your U.S. citizenship.

How many of us could do that? I’m not sure I could. As far as I know, a driver’s license doesn’t constitute proof of citizenship. Perhaps, if I dug out all the plastic in my wallet – discount cards from Safeway and the local Ace Hardware – they would be satisfied. And I suppose my Medicare card would work.

But what if, for instance, I was in my 30’s and didn’t have a Medicare card? Or if my complexion were just a bit on the dusky side, giving me a Latino look? Or – God forbid – a middle-eastern look? Could I be removed from the train and interrogated and investigated for hours? These days, the answer is, yes. 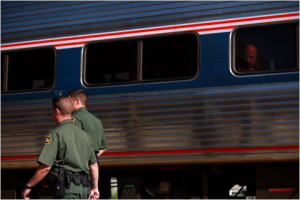 Sound far-fetched? It isn’t. Over the past several weeks, there have been a number of news reports and blogs about what are apparently random appearances by the Border Patrol on some of the Amtrak trains that run near – but do not cross – the Canadian border.

We all know there are people in the world who would do us harm and, as a consequence, there is the need for appropriate security measures. But it sure seems to me that this is overkill … and even unconstitutional, if someone were to press the issue in court.

Legal questions aside, it would certainly be interesting to see what the results of this activity might be … and if those results could possibly be worth the time and money it took to achieve them.

Do you suppose the powers-that-be would produce that information if we asked for it? Of course not … it’s a matter of national security, you know.

Previous Looking Closer (The Bee) 09.14.10
NextAmtrak Had A Good Idea? Well, Cancel It!