If You Build It, People Will Come – a LOT of Them! 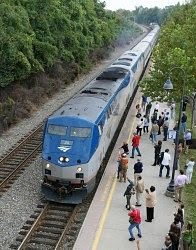 In November of 2007, a group of civic leaders from central Virginia, got together, formed the Piedmont Rail Coalition, and started banging the drum to get Amtrak to extend it’s northeast regional service farther south and into their area.

It took a helluva lot of work, but on October 1st of 2009, daily service began linking Lynchburg (that’s the new train in the Lynchburg station) and Charlottesville with Washington, DC, and points north along the Northeast Corridor.

But here’s the thing: Before the new service began, Amtrak predicted an annual ridership of 51,000 people. That’s annual … as in 12 months. But after just six months, 55,025 people had ridden the train along its newly extended route … more than double the initial projections.