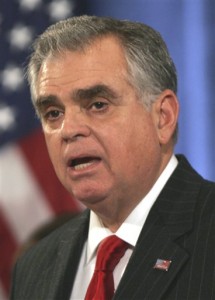 A month or so back, U. S. Transportation Secretary Ray LaHood was one of the featured speakers at a conference sponsored by the Federal Aviation Administration where, clearly, most of the conference attendees were involved in the aviation industry.

One of the speakers criticized the Obama administration’s focus on rail passenger service, which prompted Secretary LaHood to offer the following:

“Let me give you a little political advice: Do not be against high-speed rail. The administration wants it. Americans want it. It is coming. We are going to be in the high-speed rail business.”

LaHood, by the way, was a long-time Republican congressman from Illinois before accepting Obamas’s appointment to run the federal DOT.

Previous Amtrak President Sure Has a Way With Words
NextIf You Build It, People Will Come – a LOT of Them!