A Productive Day Meeting With the “Little Punks”

The NARP meetings – that’s the National Association of Railroad Passengers – have just concluded and we’ve ended on a very positive note. After too many years of a hostile administration, there is strong pro-rail sentiment here in Washington now, both in Congress and especially in the White House.

We attended to a good deal of regular business, and there were sessions with interesting speakers, but the really important activity was yesterday during our annual “Day on The Hill”. That’s when the 80 or 90 of us break into small groups and go knock on Congressional doors, visiting with staff members and elected officials from our own states, and even our own districts. 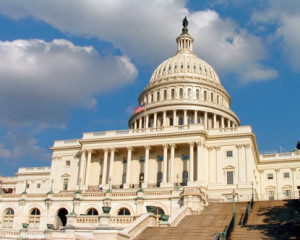 The message is pretty much the same for all of them: thanks for your support of rail and of Amtrak, and please do what you can to make sure that passenger rail gets adequate funding. (Or, in some cases, it’s we really wish you would wake up to the importance of passenger rail and get with the program!)

Being the only member of NARP’s Council of Representatives from Hawaii, I flew solo and called at the offices of Senators Dan Inouye and Dan Akaka, plus a visit to our sole Member of the House, Mazie Hirono. (We normally have two representatives, but a month ago my good friend, Neil Abercrombie, resigned his House seat after serving 20 years to run for Governor of Hawaii.)

And I’m proud and grateful to our Hawaii delegation: despite the fact that we’re the only state that will never be linked to the national passenger rail system, our senators and reps have always understood the importance and the value of trains and have consistently voted in support of rail in general and of Amtrak in particular.

This was the third time that I’ve gone through this exercise and I have always come away with a very good feeling: it’s democracy in action … people going to see their elected representatives and offering ideas about making this county better.

Furthermore, I have always been impressed by the staff people we’ve met and talked to. They are universally alert, smart, interested, articulate, responsive and polite. Anyone visiting any one of the senate or house offices will come away with the very same impression, regardless of the cause that takes them there.

And that’s why I was so outraged by the nasty remark made by John Boehner, Republican Minority leader in the House, who referred to the staff people for Democratic members working on the financial reform legislation as “little punk staffers.” He couldn’t be more wrong or more unfair. (Congressman Barney Frank had badges printed up and distributed to many of the staffers, who wore them proudly!)

I suppose we should probably make allowances for Boehner. Poor guy, he’s an arrogant jerk and a mindless ideologue, and just can’t help it.

Previous How About A Hotel Review?
NextTaking Amtrak 300 Years Back in Time