Being a U.S. Senator Means Never Having to Say You’re Sorry.

Many of us have come to expect the irrational from Senator Tom Coburn (R-Oklahoma). This, after all, is the guy who says a doctor who performs an abortion should stand trial for murder. Of course he’s already on my kukai list for his goofy attacks on Amtrak, including the false claim that the railroad pays $6 a bottle for the beer it sells in their dining cars. He was proven wrong and so informed, but continues to make that accusation in his anti-Amtrak blatherings. 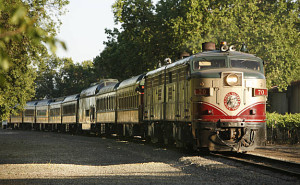 One would have hoped for more and better from John McCain, but he has recently joined with Coburn in attacking – are you ready for this? – the Napa Valley Wine Train. Coburn and McCain are claiming that some $54 million in stimulus money is being spent on the train — for the benefit of rich tourists — and they have oh-so-cleverly renamed it the Stimulus Waste Express.

One small problem: They … are … wrong!

The money, you see, is for a badly needed and long-overdue flood control project which will require a section of track used by the Wine Train to be moved and elevated. It’s either that or put the Wine Train out of business. (Can you imagine the anti-government howls that would have provoked!)

The error was pointed out to Coburn’s staff, but his office refuses to admit they screwed-up. So far, no comment from McCain despite a thoughtful, respectful appeal from officials of the Wine Train.

And that’s too bad, because the flap generated some negative publicity which apparently caused a drop in business for the Wine Train, and a formal acknowledgement of the mistake could help to turn that around. Clearly, an apology would be asking too much.

I know these guys are heavy into self-promotion, but I thought they were pro-business, too! Apparently not when they have to choose between the two.

Previous Finally! Passenger Rail Advocates Can Cheer.
NextSometimes, the Only Solution is Whatever It Takes