The Proof Will Be In The Ordering

It has long been my opinion – not to mention my hope – that a major effort would be mounted both by and for Amtrak to get some new rolling stock for the railroad. The typical life expectancy for a rail car is 50 years and most of Amtrak’s fleet is nearing that mile marker. 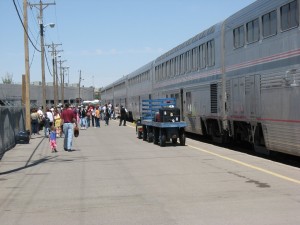 Personally, I would like to see a major emphasis placed on a lot of new bi-level Superliners – coaches and sleepers – because it will be impossible for Amtrak to add frequency to any long-distance routes, much less open any new ones, without literally hundreds of new Superliners. Same thing with single-level coaches for eastern trains and short-haul routes.

The good news is that Amtrak has now announced plans to order more locomotives and railcars. What remains to be seen is what kind of cars, although Amtrak’s news release did say the would be ordering both single- and bi-level cars.

The big problem, of course, is how will Amtrak pay for all that new equipment? Through all the Bush years – and, to be honest, through the Clinton years, too – Amtrak was given barely enough money to survive, let alone to think about new equipment.

So, with bated breath, passenger rail advocates are waiting for the promised specifics: what kind of cars, how many cars, and how will they be paid for.

Previous A Little Snow Removal – All in a Day’s Work
NextHow About Socking It to the Speeders?