Honolulu’s Transit Opponents Have No Shame 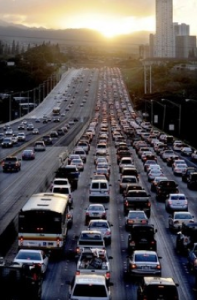 Honolulu has had three shots at a transit system over four decades. The first two times, the project lost on 5-4 votes by the Honolulu City Council. The third time proved to be the charm when transit was approved by Honolulu voters last November.

Is transit needed on Oahu? You tell me. This shot was taken a month or so ago after a three-car accident occurred on a local freeway during afternoon rush hour.

But, as expected, the rail opponents still rant and rave.

Yesterday, an organization called Small Business Hawaii trotted out a study that actually claims the city’s transit system will be more polluting than automobiles … a statement so easily and so often disproved as to be patently absurd. (As testimony to the depth of work going into this document, Small Business Hawaii paid the princely sum of five thousand dollars for it.)

Standing behind the clown who wrote this disgraceful screed was Hawaii State Senator Sam Slom, a Republican, who has also headed Small Business Hawaii for several decades. Slom, an arrogant, inflexible libertarian ideologue, is heartily detested by most people holding differing views who have ever had to deal with him.

Years ago, when Honolulu was debating transit for the second time, I briefly served on the board of directors of Small Business Hawaii. Opening the paper one morning, I read to my great surprise that SBH had come out in opposition to the city’s transit project.

I immediately called Sam and asked how a policy decision like that could be made without board approval. “It’s my prerogative,” Sam said. “Well,” I replied, “if that’s the way decisions are made, I may have to reconsider my participation as a board member.” “I’ll have a membership refund check in the mail to you this afternoon,” Sam snapped. And he hung up.

That’s who is behind this absurd, embarrassing, insulting, biased, half-baked, fraudulent “study.”

But what’s truly shocking is that the Honolulu media actually bought it … at least to the extent that they gave it equal play on the TV news last night. No skepticism, no questions, no checking the credentials of the guy who prepared it.

Somewhere, Walter Cronkite is spinning in his grave like a goddam top!

Previous So What Do YOU Do for Fun and Relaxation?
NextPan American – Gone, But Fondly Remembered