The Ups and Downs (and Highs) of Grand Mesa

The only firm objective for our last day in Colorado was to connect with Amtrak’s California Zephyr late that afternoon in Grand Junction. But here we were, deliciously sipping our morning cappuccinos in a funky little coffee shop in the old Colorado mining town of Ouray and contemplating how to spend the next six or seven hours.

Our map showed a main road that would take us directly to Grand Junction, but that would get us there three or four hours early. Instead we opted for a much more circuitous route, taking us still farther east on roads that Rand-McNally depicted with very narrow, very squiggly black lines … roads that would take us to, then up and over, something called Grand Mesa. 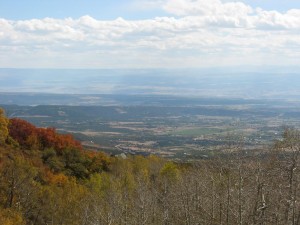 It took less than an hour top reach Grand Mesa which, as it turns out, is a National Forest. As we made the slow climb up the southern flank, spectacular vistas began to appear … looking back across the fertile valleys we had just passed through. 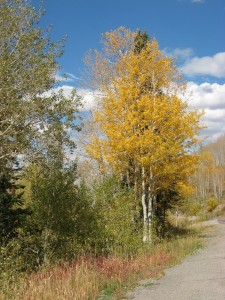 My first surprise was the mesa itself: not barren, not rocky, not flat-topped and not at all the stereotype of a mesa I had in my head. This mesa – Grand Mesa – is a damn big mountain, with steep sloping sides and thickly covered with evergreens and aspens already turned brilliant gold in the crisp fall air. 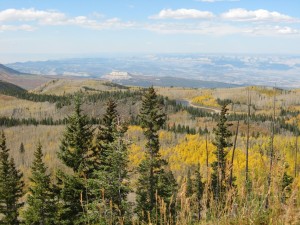 The top of the mesa is indeed flat … at least more or less so … and is criss-crossed by many trails and dotted with lodges being used by hikers and campers. It takes 15 or 20 minutes to cross it, then we begin our descent down the northern slope of this unique landmark. 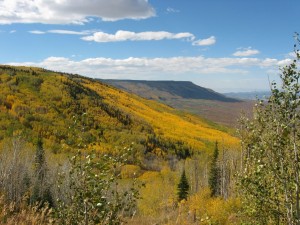 Perhaps it’s a bit colder here on the northern side of Grand Mesa, for all the aspens have turned yellow and their shimmering leaves create the impression of an avalanche of gold spilling off the top of the mesa and sliding thousands of feet into the valley below. It’s a startling illusion, one the camera doesn’t really capture.
On our way again, we reach Grand Junction in ample time to return the rental car and meet the California Zephyr for our overnight right to Davis, California … all through one of the most scenic stretches to be enjoyed by passengers on any Amtrak route. More on that next time.

Previous There’s a Reason Why People Visit Colorado!
NextYes, Virginia, there is such a thing as dumb luck.