We had another two days before arriving in Grand Junction, Colorado, where we would connect with Amtrak’s California Zephyr and the ride back to the West Coast. What to do? Where to go? 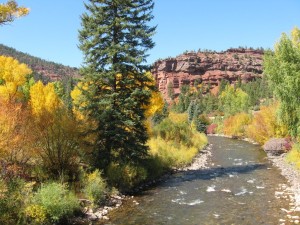 We finally decided to turn back toward the southeast and head for Ouray, Colorado, where my wife’s great grandfather was the editor of a newspaper back in the late 1800s. The drive from Moab, UT, would take about three hours and, as it turned out, was a big extra bonus. The road took us over the La Sal Mountains and, after we crossed into Colorado, through the towns of Paradox and Bedrock. We soon began following the San Miguel River — so damn pretty at this time of year, with all the aspens changing color, we had to stop and soak it all up for a while. 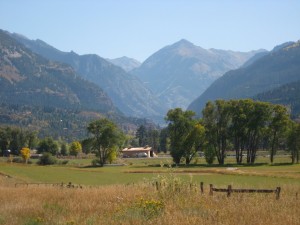 After crossing over the Dallas Divide at almost 9,000 feet of elevation, we headed down through some idyllic valleys, passing through farm and ranch country … at one point, having to brake hard to avoid a small herd of seven mule deer that dashed across the road in front of us. Beautiful creatures! I thought about them a lot over the next couple of days as we began seeing signs in front of motels saying “WELCOME HUNTERS.” (Oh, yeah … and when I noticed that all of the road signs — all of them — were riddled with bullet holes.) 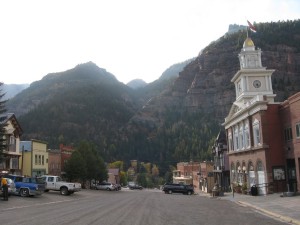 Ouray, Colorado (pronounced OOO-ray) is shoe-horned into a narrow pie-shaped opening between two steep, almost sheer, mountains. The town grew up around all the gold mining that once went on in this area and still has a hundred-year-old look and feel about it.
Just a block up from the Ouray Hotel is the little museum here, praised by the Smithsonian as “the best little museum in the west” with good reason. When we stopped in to check on my wife’s relative, she spoke his name to the receptionist, prompting the curator to jump up from his desk behind a partition and proclaim that they had a lot of material on the old guy. He asked if my wife has any papers or photos she might donate to their collection. She has and she will.