Day Two out of Moab, Utah, and we headed off to Arches National Park. The entrance to the park is just a few miles, but there is a great deal to see — not to mention miles to cover — once you move along after a stop at the Visitor Center. 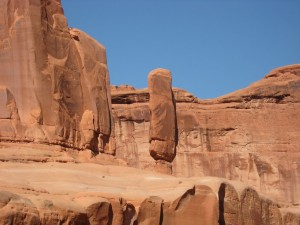 First, there are a number of very impressive rock formations, including this one where a gigantic stone, which I would guess to be 75 or 80 feet high, seems to be precariously balanced on top of a much smaller stone. (Smaller? Damn thing was probably the size of my garage!) 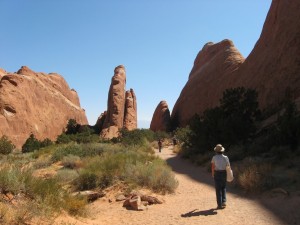 You can park your car and hike off on a number of paths to see other rock formations and a number of natural arches. The temperatures were tolerable in early October, but are no doubt brutal in July and August. Whatever the time of year, bring water! 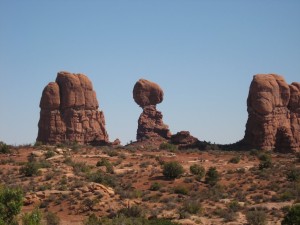 Another weird formation. Our vantage point here was probably a quarter of a mile away — maybe more than that; it’s very hard to tell — so I have no idea how big that giant boulder is. But, take my word for it: that sucker is REALLY big! 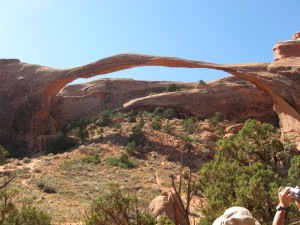 This is, of course, the highlight of any visit to Arches. To give you an idea of the scale, this one is something like 350 feet in length, so you can see how distances are so deceiving. Park officials won’t let anyone get closer than where we were standing, and with good reason: About 10 years ago, some people were sitting beneath this arch when they heard a very ominous cracking sound. Being sensible folks, they jumped up and ran like hell. And a good thing, too, because 70 or 80 tons of rock broke off from the under side of the arch and crashed down on the spot where they had been resting. Furthermore, this was not an isolated incident. There have been other collapses since then.
Bottom line: Arches National Park … very much worth seeing!