After leaving the Grand Canyon, we stopped at the Navajo National Monument – 10 miles off the main road and bit off the beaten path, but well worth the extra hour or so. 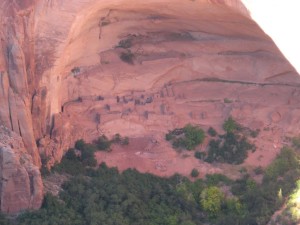 The feature attraction is a stunning view of an ancient cliff dwelling from across the canyon. (You’ll have to enlarge the photo by clicking on it before you can make out the structures.) This settlement dates back more than 800 years and was abruptly abandoned when a 20-year drought ended. What was that? When the drought ended? Yep … that’s what the ranger said. The chief took it as a sign they were to move on. Go figure.

From there we headed to Moab, Utah, which we used as a base of operations while we explored two nearby attractions, the first of which was Monument Valley. I had never realized that it is not a national park but rather is located on Navajo land and entirely controlled by the Navajo Nation. And I must say they do a very fine job of it, too. 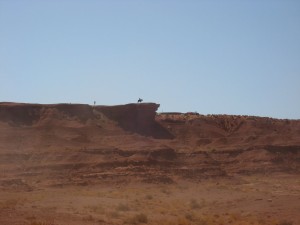 I couldn’t resist stopping for this shot, taken from the dirt road that winds through Monument Valley. I suppose, for an even better effect, I should photoshop-out the guy standing to the left of the rider, but this is what I actually saw. Still pretty classic, eh? 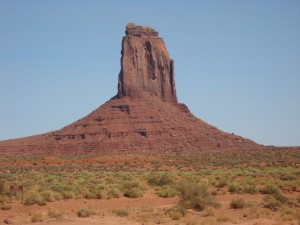 By this time we had settled into a Best Western at Moab, Utah, which we used as a base of operations. You can ride through Monument Valley on a dusty dirt road, either in your own car at your own pace and with your air conditioner on … or on seats in an open flatbed truck under a canvass top. (Gee … let me think … which of those options will I find more attractive?) 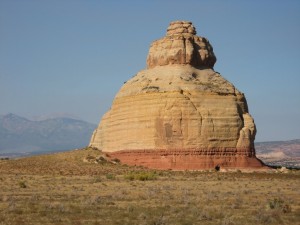 Not all the impressive rock formations are in the various national parks. You see them all over the place! This one was massive — very hard to tell, but I guessed it to be at least 500 feet high — and was located outside the parks as we were driving to Moab, Utah. Pretty ho-hum for the locals hereabouts, I suppose … just another big rock stuck out in the middle of a field. But another big WOW! for us.