A number of Republicans embarrassed themselves and their party during President Obama’s speech on health care reform to the joint session of Congress tonight.

The most egregious example was the arrogant buffoon from South Carolina, Joe Wilson (above, center, at the infamous moment), who shouted, “You lie!” when Obama said illegal immigrants would not be covered under health care reforms being proposed.

For the record, several non-partisan organizations have researched the proposals and said that Obama’s statement is correct. So Wilson is not just a boor, he is an ignorant boor.

But other Republican members held up signs and made derogatory comments during the speech … comments loud enough to be heard and reported by the media … behavior that was reprehensible and unprecedented. 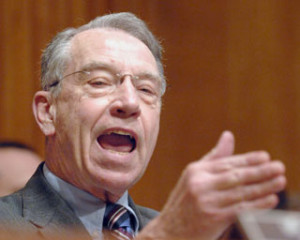 These are the same smarmy hypocrites who demand a bipartisan approach to this issue in the media, then tell constituents at their town hall meetings that their mission in life – well, for this year anyway – is to defeat “Obama-care.” Among others, that would be Republican Senator Chuck Grassley of Iowa (above). 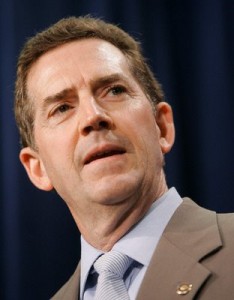 Senator Jim Demint, also a Republican and, like Congressman Wilson, is also from South Carolina, is on the record saying that Republicans should defeat Obama on this health care issue, because it would damage him politically.

In other words, screw all you people who can’t get or can’t afford health insurance. And screw all the rest of us who are paying twice what we should be paying for whatever health insurance we do have. Politics, not us, is what’s really important to Demint and the others of his Republican ilk.

And what a miserable, petty, selfish, callous, pathetic bunch they are, too.

Previous “But Officer, This Isn’t My Stop!”
NextCan Someone Explain This to Me?