Big Number or Smaller Number, Up Is Still Up.

When talking about the resurgence of interest in train travel, the tendency is to quote big numbers … noting, for example, that Amtrak ridership over the past three or four years has increased from 21 to 25 million passengers a year.

The trouble is, it’s hard to grasp any practical meaning from numbers that big. 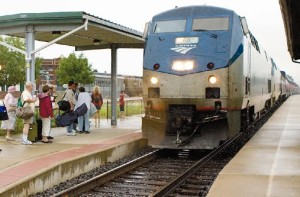 OK, so here’s a much smaller number. Smaller, yes, but it’s still another example of the increasing popularity of rail travel coming from the heart of middle America … from Galesburg, Illinois.

According to Shannon O’Malley, the Station Agent at Galesburg, ridership there is now more than 100,000 a year. Pretty impressive for a town with just 35,000 residents, wouldn’t you say?

Previous Great! But How About Some Superliners, Too?
NextFriendly Skies, But They Sure Look Crowded!