An Unexpected Slice of Life in Baltimore

After seeing three games in Boston between the Red Sox and the Oakland A’s, I took Amtrak to Baltimore, where the Sox were to play a three-game series with the Orioles.

Over the years, Baltimore has become a favorite destination for thousands of Red Sox fans whenever their team plays the Orioles. The hotel where I stayed overlooks their wonderful ballpark, as you can see from the photo I took from my hotel room, and the lobby and restaurant and bar were packed with people sporting Red Sox caps and shirts. And, indeed, Red Sox fans appeared to make up at least 20- to 30-percent of the crowd at the two games that I saw. 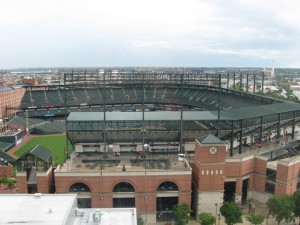 On my last morning in Baltimore, I hopped into a taxi for the 20-minute ride from the hotel to the Amtrak station across town where I would catch a train to Washington. As we started off, I remarked to the cab driver that there were a lot of Red Sox fans in town.

Yes, he said, there always are whenever the Red Sox play the Orioles. He turned out to be a knowledgeable baseball fan and for the next several minutes we discussed the pros and cons of the two teams.

He supports the Orioles, but likes the Boston fans because, he said, they stay at various hotels around town, see the sights, and are fun to be around. “They root hard for the Red Sox and beat us most of the time,” he said, “but they are very friendly and show respect for our team and for our city.”

Then, to my surprise and delight, he launched into a diatribe against New York Yankee fans. He described them as loud, arrogant and generally unpleasant. “They always stay downtown, and they drink too much,” he said. “From them, we get no respect. Rude people, most of them.”

By the way, the cab driver – proud resident of Baltimore and staunch Oriole fan – was Fahti Mohammed Muktar, who came to this country 11 years ago from Iraq.

Previous Washington State Ferries: It’s THE Way to Go
NextPass the Battens, Stand By the Hatches!