Chicago to Boston on the Lake Shore Limited

(Once again, my apologies for the long delay between posts. Amtrak does not yet have wifi on its long-distance trains, but I was hoping to get to this during my stopover of several hours in Chicago. Alas, the internet connection in Amtrak’s Metropolitan Lounge wasn’t working. I will do my best to make up for it over the next several days.)

The first thing to be noted — at least it’s the first thing that comes to my mind — is what certainly seems to be a marked difference between the on board crews working the long distance western trains and the overnight trains you encounter in the east.

By “western trains,” I mean those running west out of Chicago … the California Zephyr (to the Bay Area), the Empire Builder (to Seattle and Portland), the Southwest Chief (to Los Angeles) and the Texas Eagle (Chicago-Los Angeles via San Antonio). Then, too, there’s the Coast Starlight (LA-Seattle) and the Sunset Limited (LA-New Orleans).

Crews on the eastern trains are just as capable and just as efficient, but seem to be a lot more … well … east coast in their attitude.

Here’s a typical case in point: as the California Zephyr was nearing Chicago, the car attendant poked his head into my roomette and said, “Sorry to disturb you, sir, but may I remove your used towels?”

By contrast, when we were 30 or 40 miles out of Boston on the Lake Shore Limited, the car attendant walked through the car with a large cloth bag calling out, “DIRTY TOWELS … COLLECTING … DIRTY TOWELS!”

I hasten to add that there’s nothing necessarily unfriendly about it … it’s just east coast vs. west coast.* 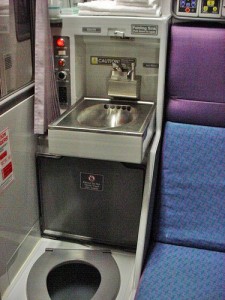 Another observation: The fundamental difference between roomettes in Superliners vs. those in Viewliners is that there is a small wash basin and toilet in the Viewliner room. In a Superliner roomette, you have to go “down the hall” to use the facilities. The Viewliner’s in-room lavatory is certainly convenient (photo above), but they do make the room seem a lot smaller and the lower half of the bunks are narrower than the upper part to make room for those extras. For me, it’s a toss-up. I don’t see the in-room facilities as a significant plus. 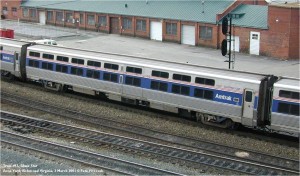 Finally, Amtrak’s on-going problems with maintenance became apparent when I boarded the Lake Shore in Chicago: the air conditioning wasn’t working in my Viewliner sleeper (like the one in this photo). It wasn’t roasting and was bearable, but it was borderline uncomfortable and I slept on top of my cover in my skivvies.

The conductor was apologetic … and disgusted, telling us that very same car had been without A/C when he had worked the same trip five days earlier. This may or may not be Amtrak’s fault, by the way. They have been kept on the edge or starvation for the past eight or more years with bare-minimum federal subsidies and it could well be they had to send that car out because there simply was no functioning spare car to replace it.

Still, both trips were very enjoyable and we actually arrived in Boston almost a half-hour early (thanks to padding in the schedule, of course).

More about my trip from Boston to Baltimore and the cross-country return in the next day or so.

* Bringing to mind the classic story about the tourist on his third day of a visit to New York City, who stops a native New Yorker on the street and says, “Can you direct me to Radio City Music Hall or should I just f–k off?”