Just Another Republican Who Wants It Both Ways 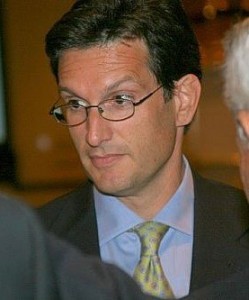 A week or so ago I wrote about Congressman Mike Castle (R-Del.), who voted against the Obama stimulus package, but nevertheless had the nerve to show up at a ceremony when Amtrak rolled out the first rail car renovated with those very same dollars. At least Castle isn’t one of those Republican politicians who are constantly on TV bashing Obama for everything.

Ah, but Eric Cantor is.

Cantor (photo), a Republican member of Congress from Virginia and the Minority Whip in the House, fairly leaps in front of the Klieg lights whenever there is an opportunity to do so. In particular, whenever the subject of the Obama stimulus package has come up, Cantor has been right there to say it’s the devil’s own work.

But surely this couldn’t be the same Eric Cantor who has come out in favor of a new high-speed rail project that would run from Richmond, VA, to Washington, DC … and which would be paid for in part by money coming from Obama’s stimulus package?