I have no idea why, but there has been a terrible rash of grade crossing accidents.

A couple of weeks ago, Amtrak’s Coast Starlight hit and killed two people in two different locations on the same day – the first in Emeryville, CA, the second about six miles farther on in Oakland. What are the odds of that happening??

A week ago, five kids were killed near Detroit when the 19-year-old driver raced past a car stopped at the grade crossing, went around the barrier and into the path of an Amtrak train running at close to 80 mph.

Two days ago, three people were killed at a crossing near Somonauk, Illinois, about 60 miles west of Chicago. There were five people in that car; two survived, but just barely 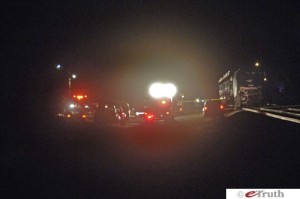 Yesterday, two people were killed in Goshen, Indiana, when the truck they were driving was hit by Amtrak’s Capitol Limited. (Photo above. I don’t have a link to this one; the report came from a fellow NARP* director in that area.)

And that’s not all: A quick check through Google yielded news of three other incidents in the past two days, each involving a person hit and killed while walking on the train tracks.

On average, there is an incident involving a train and a motor vehicle or a person (pedestrian, trespasser or suicide) every two hours around the clock. And, as I have noted here several times before, every single one of these tragedies was avoidable.

Best guess at this point is that two of the incidents were suicides. But all the others were the result of human carelessness or stupidity. It’s very hard to feel sorry for the drivers. But the passengers …!

Previous Uh … Mike wants to say a few words, too.
NextWhere Have All the Giants Gone?