Is The End in Sight for Amtrak’s Western Trains?

There is growing concern about the future of Amtrak’s long distance train service in the western part of the country. 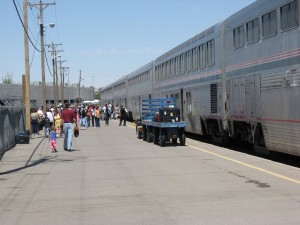 This includes all the trains using Superliner equipment, bi-level coaches and sleepers:

California Zephyr, running daily between Chicago and the Bay Area;

City of New Orleans, running daily between Chicago and New Orleans; and

Here’s the reality: These trains serve literally many hundreds of cities and towns scattered across 26 states.

Here’s the problem: Most of the Superliner cars are now about 35 years old. The life expectancy of a passenger rail car is about 50 years, even assuming regular and conscientious maintenance.

Here’s the concern: Amtrak apparently has no plans to order more Superliner equipment. And even if they did, it would be three or four years before a significant number of the new cars would begin entering service.

Here’s the solution: Get the political powers in those states – governors and legislatures, plus senators and representatives in Washington – to provide the money and mandate that Amtrak spend it on new equipment.

Here’s the benefit: Jobs, in the short term; more and better train service for another 50 years.

CORRECTION/ADDITION: Superliner equipment is also used on two eastern trains: the Capitol Limited (daily between Washington and Chicago) and the Auto Train (daily between Lorton, Virginia, and Sanford, Florida). Obviously these trains would also be affected as Superliners wear out and if there are no new cars to replace them.