Three Rail Deaths in Three Days in the Bay Area

What are the odds?? This past Friday, Amtrak train number 535, running from Sacramento to San Jose, hit and killed two people … in separate accidents! The train — like the one shown below — struck a woman near Berkeley then, less than a half an hour after resuming its run, hit someone else at Oakland. Details are here. 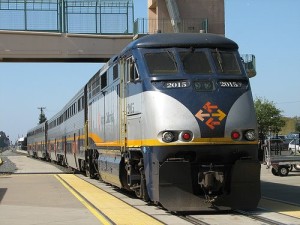 You will note from the story that the train crew was replaced after the first accident. This is pretty much standard procedure and is the largely unreported aspect of these stories. News reports invariably focus on the victims, but these events often have a profound effect on the train crews, who see the accidents coming but are almost always powerless to avoid them. There is simply no way to stop a moving train in time.

Virtually 100 percent of these incidents are avoidable and, sadly, the people killed are almost always to blame one way or another. They aren’t paying attention; they don’t hear the train coming because they’re talking on a cell phone or have earphones on; they’re careless or reckless or stoned or drunk; or they’re suicidal.

And today (Sunday) comes news of yet another fatality, also in Oakland. A woman, apparently homeless, was struck and killed this morning by an Amtrak train shortly after it had left Jack London Square. The news report doesn’t say, but I’d guess train was the southbound Coast Starlight, which leaves that station at 8:50 a.m. on its way to Los Angeles.

How tragic. Let’s just remember to include the train crews among the victims.

Previous Whither Goest Thou, Sarah? And Wherefore?
NextIs The End in Sight for Amtrak’s Western Trains?