Niagara Falls: One of Our Great Natural Wonders

Sometimes well-known and popular tourist destinations become out-of-fashion … you know, for whatever reason it’s just not cool to go there anymore.

I can’t tell you why, but Niagara Falls was always in that category for me. I just pictured wall-to-wall honeymooners gawking and never could muster any interest in going there.

Until several years ago, when I attended a business conference nearby. 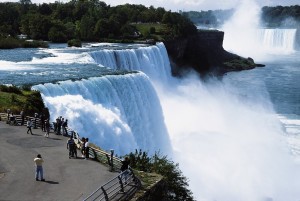 My first clue that this was really something was when I noticed a cloud of spray over the site from several miles away. Then, as we got closer, the noise … a constant roar from millions of gallons of water pouring over the edge of the falls. And when you first see it … WOW! 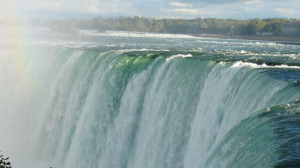 You can walk right up to the edge, by the way.

I was reminded to mention this when I received a news release about VIA Rail running extra trains to the falls from Toronto this summer.

And Amtrak‘s Empire Service includes several trains daily to Niagara Falls coming up from New York City. It’s about a nine-hour trip but it’s through some wonderful countryside, especially in the Fall. And there are some major stops along the way: Albany, Saratoga Springs, Syracuse and Rochester among others.
At any rate, do consider a visit to Niagara Falls. It’s quite spectacular and well worth the time.

Previous It Looks So Quiet and Peaceful … NOT!!
NextWhither Goest Thou, Sarah? And Wherefore?