What Do They Got That We Ain’t Got?

Most people are aware that when it comes to high speed train service, France has led the way with its TGV. They’ve been at it a long time and are acknowledged as probably the best in the world in terms of operating a passenger rail system that effectively and efficiently services the entire country.

But look out … here comes Spain! After pretty much starting from scratch in 1992, the Spaniards will have an integrated 6,000-mile high-speed system linking the entire country by 2020 … and they will have done it all in less than 30 years. 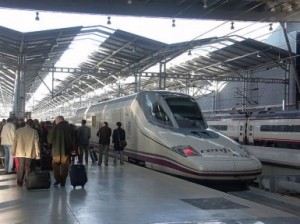 The AVE trains run at speeds up to 300 kilometers an hour — that’s 187 mph — and link many of the major Spanish cities. And the system has already changed the way Spaniards travel, drawing business from the airlines and inducing people with a reputation as home-bodies to get out, move around and see the rest of their country.

Our politicians are constantly bragging about this being “the greatest country in the world.” Well then, surely we ought to be able to build a decent high speed rail system linking our major cities … especially if the Spain and France and Japan and Poland and Russia and Germany and damn near every other industrialized country in the world has already done it!

Previous A New – and Excellent – Idea for the Sunset Limited
NextWhy Can’t We Ever Learn From Past Mistakes?