I’ve frequently noted here that the rest of the world has had the right idea about passenger rail for a long, long time … with government investing heavily in high-speed systems linking major urban centers.

Over the same span, we here in the U.S. we have allowed our rail system to stagnate. As a people, we have chosen to fly or drive instead of taking the train. There really was no choice, because we’ve had a federal government run by free-market ideologues philosophically opposed to subsidizing trains.

Here are two more examples – one of progress, another of a lack of same – coming from other parts of the world.

First, the Russians are about to inaugurate their first high-speed rail line, which will operate between Moscow and St. Petersburg at speeds up to 187 miles per hour. They have named their train the Sapsan after the peregrine falcon, which can reach 200-plus miles an hour in spectacular power-dives. 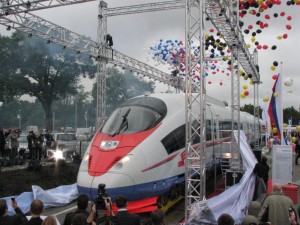 The equipment is manufactured in Germany and the Russian government will be buying a total of eight more trainsets over the next year and a half.

At the opposite end of the spectrum, we have the example offered by Mexico, where passenger trains were privatized some ten years ago. Today, only one real intercity passenger train is left, running between Chihuahua and Los Mochis – the Copper Canyon route – and it’s heavily dependent on tourism.

The free market did a helluva job for the Mexicans, didn’t it!

Previous And, Speaking of Idiots …
NextGood News for Rail Passengers from Up North